Article about the book Bold Beyond Belief: Bill Denz, New Zealand's Mountain Warrior, 2nd edition.Maxim, Paul2012Twenty eight years after the original hard man of New Zealand climbing was killed in the Himalaya, the story of this legendary mountaineer has been recorded in a book.The New Zealand Alpine Club is proud to support this biography of Bill Denz. Running to nearly 300 pages, with over 100 images and a Foreward from Greg Child, Bold Beyond Belief is the story about a kiwi climber whose attitude, passion, drive and vision is unique in the 150 year history of New Zealand Mountaineering.97804732331989780473233198Bold Beyond BeliefBiographyen caught my eye in AAJ 2012. Bill Denz was a New Zealander who put up large number of groundbreaking ascents. Many of his routes in New Zealand Alps are considered to have been decades ahead of his time.

Denz is best known for his very bold solos of routes at the very pinnacle of difficulty at the time. Routes like DenzMount Cook3754mCarolina FaceNZ5-/TD; 60-652000m and SW Buttress & West FaceKusum Kanguru6369mMain summit, SW side are still today considered very serious propositions. Aside of being very bold, he was also very persistent, a fact that is highlighted by his 10+ attempts to solo Compressor RouteCerro Torre3127mEast faceED-/ED1/nccs VI 5.10b,A2 70°; 6a,A2-3/5.10,A-2/VI,A2-3, 80°900m (27 roped pitches). Like too many others, he was killed by avalanche when attempting West pillarMakalu8463mSouth side in 1983.

At the end of the 70's duo Simon McCartney and Jack Roberts put up two extremely difficult and serious climbs in Alaska: Timeless faceMount Huntington3731mNorth facenccs VI 5.9 WI5 and SW faceDenali6190.5mSW faceAK6; 5.9,A38,000'/4000m from base camp. The latter climb proved nearly fatal for Simon. His book The Bond: Two Epic Climbs in Alaska and a Lifetime's Connection Between Climbers.Mccartney, Simon & Westman, MarkVertebrate Publishing2016'Man, the only - only - good thing about that climb was that you were tied on to the other end of the rope.' Simon McCartney was a cocky young British alpinist climbing many of the hardest routes in the Alps during the late seventies, but it was a chance meeting in Chamonix in 1977 with Californian 'Stonemaster' Jack Roberts that would dramatically change both their lives - and almost end Simon's. Inspired by a Bradford Washburn photograph published in Mountain magazine, their first objective was the 5,500-foot north face of Mount Huntington, one of the most dangerous walls in the Alaska Range. The result was a route so hard and serious that for decades nobody believed they had climbed it - it is still unrepeated to this day. Then, raising the bar even higher, they made the first ascent of the south-west face of Denali, a climb that would prove almost fatal for Simon, and one which would break the bond between him and climbing, separating the two young climbers for over three decades. But the bond between Simon and Jack couldn't remain dormant forever. A lifetime later, a chance reconnection with Jack gave Simon the chance to bury the ghosts of what happened high on Denali, when he had faced almost certain death. The Bond is Simon McCartney's story of these legendary climbs.97819102406639781910240663The Bondguidebooken tells the story about these groundbreaking ascents. 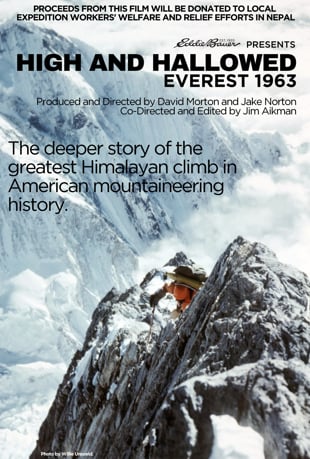 Their route was the most difficult on Everest at the time is is widely c0onsidered to have been landmark in the history of mountaineering. The dramatic events of the expedition are also covered by the books Everest: The West Ridge, Reprint edition.Hornbein, Thomas F.Mountaineers Books1998Details the author and his partner Willi Unsoeld's ascent of Everest's West Ridge in 1963.97808988661629780898866162Everest: The West Ridgeguidebooken and The Vast Unknown: America's First Ascent of Everest, First Edition Edition.Coburn, BroughtonCrown2013By the author of the New York Times bestselling Everest: Mountain Without Mercy, this chronicle of the iconic first American expedition to Mt. Everest in May 1963 &ndash; published to coincide with the climb's 50th anniversary&shy; &ndash; combines riveting adventure, a perceptive analysis of its dark and terrifying historical context, and revelations about a secret mission that followed.&#160;&#160;In the midst of the Cold War, against the backdrop of the Bay of Pigs fiasco, the space race with the Soviet Union, and the quagmire of the Vietnam War, a band of iconoclastic, independent-minded American mountaineers set off for Mt. Everest, aiming to restore America's confidence and optimism.&#160; Their objective is to reach the summit while conducting scientific research, but which route will they take?&#160; Might the Chinese, in a public relations coup, have reached the top ahead of them?&#160; And what about another American team, led by the grandson of a President, that nearly bagged the peak in a bootleg attempt a year earlier?&#160;The Vast Unknown is, on one level, a harrowing, character-driven account of the climb itself and its legendary team of alternately inspiring, troubled, and tragic climbers who suffered injuries, a near mutiny, and death on the mountain.&#160; It is also an examination of the profound sway the expedition had over the American consciousness and sense of identity during a time when the country was floundering.&#160; And it is an investigation of the expedition's little-known outcome: the selection of a team to plant a CIA surveillance device on the Himalayan peak of Nanda Devi, to spy into China where Defense Intelligence learned that nuclear missile testing was underway.97803078871469780307887146The Vast Unknownguidebooken.

Fitzroy traverse is very alpine undertaking. Something which perhaps is somewhat out of the norm for both of the protagonists who are world class rock climbers not particularly known for their alpine exploits. That said both have extensive experience of scaling large rock faces rapidly. To pull the Fitz traverse off within limited weather windows of Patagonia, speed is obviously of prime importance. Something that the first ascentionists are very familiar with having both held The Nose speed record and climbed many Yosemite big walls in a day.