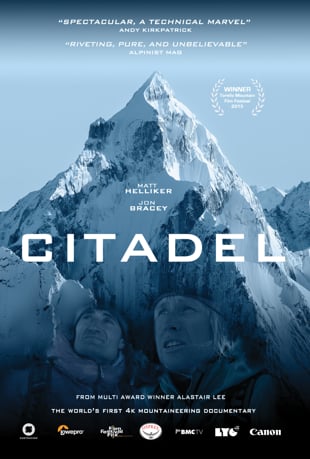 New film by Alastair Lee is Citadel 20152015-10-08Dubbed ‘The Mountain God’, the Citadel is a stunning 3000m peak in one of the remaining untouched corners of the Great Alaskan Range: The Neacola Mountains. Due to their typically poor conditions and remote location are largely unexplored. Matt Helliker and Jon Bracey are one the UK's most formidable partnerships in alpine climbing with many world class ascents to their names from the UK to the Alps and the greater ranges. Their objective is to make the first ascent of the extraordinary 1200m long north-west ridge.Alastair LeeMatt Helliker (Himself - Climber); Jon Bracey (Himself - Climber)Documentary; Adventurealpinism; Alaska; Neacola Mountainshttps://www.youtube.com/watch?v=j9gC9zpmh9I373123 is out. The film is the first real climbing film shot in 4K (not counting amateur filmings with GoPro hero and the like which are also 4K). The flick features Matt Helliker and Jon Bracey, the same team that features in previous film Moonflower Posing Productions20112011-11-23Take a front seat ride and experience what it takes to make a first ascent on one of the world's biggest alpine faces in 2011. The film joins top British alpinists Jon Bracey and Matt Helliker as they honor their late friend Jules Cartwright by following his original vision of making a stunning and formidable new line on Mt Hunter's incredible north buttress; The Moonflower. Climbing the steepest and coldest section of the buttress; marvel at the dogged determination of the world class climbers as they approach exhaustion in an effort to complete the line before the increasingly freezing conditions irrevocably turn against them. The fruits of their efforts result in 'The Cartwright Connection' Ca 6000ft, Alaskan grade 6 (M6, AI6, 5.8, A2).Alastair LeeJon Bracey; Matt HellikerDocumentary; Adventurealpinism; Alaska; Mount Hunterhttp://image.tmdb.org/t/p/original/dJz0pvtJoffxbrgx8u9mpTeqXST.jpghttp://www.posingproductions.com/product.php?form_action=detail&product_id=248333651.

As in "Moonflower" the guys find themselves again in Alaska but whereas the previous time they were climbing variation to classic MoonflowerMount Hunter4442mNorth sideAK6; VI AI6 M6/Sco 7, 5.9,A32100m, 7-10 days on route this time they visit very little known Neacola Mountains of Aleutian Range. Their target was Northwest ridgeCitadel2597m. Unlike what is normally the case, climbers did not report the details about the climb to keep audience in suspense.