The Other Face of K2 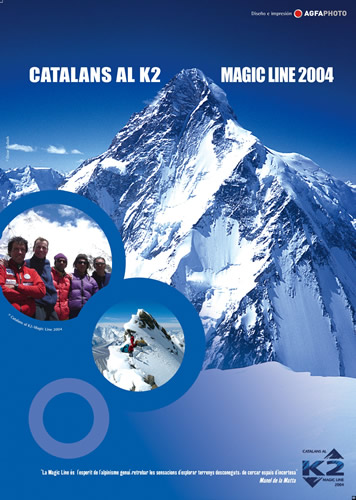 While The Summit image now films20122012-10-12The Summit is a 2012 documentary film about the 2008 K2 disaster directed by Nick Ryan. It combines documentary footage with dramatized recreations of the events of the 2008 K2 disaster. On the way to and from the summit, eleven climbers died during a short time span creating one of the worst catastophes in climbing history. Much of the documentary footage was captured by Swedish mountaineer Fredrik Sträng. Sträng was planning to do a Documentary which was aborted due to the fact that he did not reach the summit. The footage was still valuable to help solving what really did happen since all the climbers had different stories about what happened.Nick Ryan Nick RyanNick Ryan (Producer)Christine Barnes (Cecile Skog); Hoselito Bite; Marco ConfortolaAdventure; Documentaryalpinism; K2; Karakoram; 2008 K2 disasterhttp://www.impawards.com/2013/posters/summit.jpghttp://thesummitfilm.com/#trailertt2363471133441 or K2: Siren of the Himalayas Ursus Films20122012-11-02Following a group of climbers attempting to climb K2 in 2009, on the 100-year anniversary of its landmark 1909 expedition. Experience the adventure, peril and serenity of a group's attempt to climb the most challenging peak on earth.Dave Ohlson Dave OhlsonGerlinde Kaltenbrunner; Simone Leorin (Narrator (Voice)); Jake Meyer; Chris Szymiec; Fabrizio ZangrilliAdventure; Documentaryalpinism; K2; Karakoram; Gerlinde Kaltenbrunner; Fabrizio Zangrillihttp://K2siren.com/wordpress/wp-content/uploads/2015/04/K2poster_new-med-712x1024.jpghttp://K2siren.com/trailer/tt2467442186079 probably are far better known and get a bigger audience, The Other Face of K2 Televisió de Catalunya20052005-12-31A documentary which follows the 2004 Catalan expedition that made the second ascent of the ‘Magic Line’ on K2. After the inevitable lengthy battles with weather and adverse conditions, one team member reaches the summit and safely descends the Abruzzi Spur, but for the rest of the team, the retreat back down the Magic Line is a nightmare that ends in tragedy.Xavier Casillanis; Narcis NogueraJordi Corominas; Oscar Cadiach; Manel de la MattaAdventure; Documentaryalpinism; K2; Karakoram; Magic Linehttp://banskofilmfest.com/bansko/wp-content/uploads/2014/11/drugoto-lice-na-K21.jpghttp://steepedge.com/ajax/categories/mountaineering/the-other-face-of-K2.html?trailer=true350754 might actually be the most interesting film. It follows a Catalan attempt on Magic LineK28611mSouth sideRus 6B; IV-V, 60°3500m. Jordi Corominas reached the highly coveted second ascent of the route.

"Magic Line" follows the SW ridge and is one of the most mythical routes of the climbing world. The name was given by Reinhold Messner who was planning to attempt it in 1979, but discarded the route. It was climbed in 1986 by a Polish team of Peter Bozek, Przemyslaw Piasecki & Wojiech Wroz in 1986. The climb is comparable in reputation to other legends like Shark's FinMeru Central6310mNorth East Pillar6a,A4, WI5,M61400m or yet to be climbed North ridgeLatok I7151mNorth face or NE faceMasherbrum7821mNorth side. There has been only two summits (until 2015), neither without fatalities.

Corominas may not be as famous as some, but he has been nominated for Piolet d'Or (at least) twice and his palmares is extremely impressive: