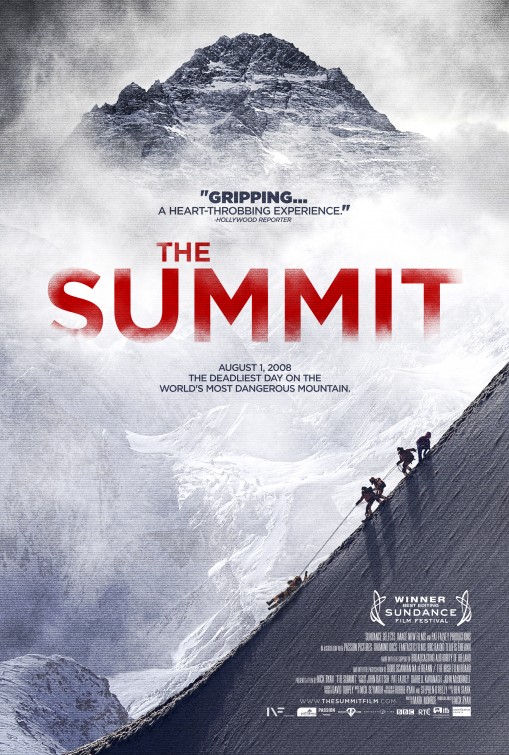 I recently discovered that a film about 2008 K2 disaster called The Summit image now films20122012-10-12The Summit is a 2012 documentary film about the 2008 K2 disaster directed by Nick Ryan. It combines documentary footage with dramatized recreations of the events of the 2008 K2 disaster. On the way to and from the summit, eleven climbers died during a short time span creating one of the worst catastophes in climbing history. Much of the documentary footage was captured by Swedish mountaineer Fredrik Sträng. Sträng was planning to do a Documentary which was aborted due to the fact that he did not reach the summit. The footage was still valuable to help solving what really did happen since all the climbers had different stories about what happened.Nick Ryan Nick RyanNick Ryan (Producer)Christine Barnes (Cecile Skog); Hoselito Bite; Marco ConfortolaAdventure; Documentaryalpinism; K2; Karakoram; 2008 K2 disasterhttp://www.impawards.com/2013/posters/summit.jpghttp://thesummitfilm.com/#trailertt2363471133441 had gone unnoticed by me. It's cast certainly isn't as impressive as that of upcoming Everest 20152015-09-25Inspired by the incredible events surrounding a treacherous attempt to reach the summit of the world's highest mountain, "Everest" documents the awe-inspiring journey of two different expeditions challenged beyond their limits by one of the fiercest snowstorms ever encountered by mankind. Their mettle tested by the harshest of elements found on the planet, the climbers will face nearly impossible obstacles as a lifelong obsession becomes a breathtaking struggle for survival.Baltasar KormákurJason Clarke (Rob Hall); Josh Brolin (Beck Weathers); John Hawkes (Doug Hansen); Jake Gyllenhaal (Scott Fischer); Sam Worthington (Guy Cotter); Robin Wright (Peach Weathers); Keira Knightley (Jan Hall); Clive Standen (Ed Viesturs); Emily Watson (Helen Wilton); Mia Goth (Meg); Michael Kelly (Jon Krakauer); Martin Henderson (Andy Harris); Elizabeth Debicki (Dr. Caroline Mackenzie); Tom Goodman-Hill (Neal Beidleman); Vanessa Kirby (Sandy Hill Pittman)Thriller; Adventure; Dramaalpinism; everest; himalaya; 1996 Everest disasterhttps://upload.wikimedia.org/wikipedia/en/2/28/Everest_poster.jpghttps://www.youtube.com/watch?v=5ZQVpPiOji0tt2719848253412 but being the movie-buff I am, I clearly have to watch this one too.