Training for the New Alpinism 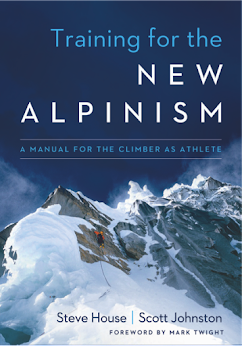 Steve House 's new book: Training for the New Alpinism: A Manual for the Climber as Athlete.House, Steve; Johnston, Scott & Twight, MarkPatagonia Books2014In Training for the New Alpinism: A Manual for the Climber as Athlete, Steve House, world-class climber and Patagonia ambassador, and Scott Johnston, coach of US National Champions and World Cup Nordic Skiers, translate training theory into practice to allow you to coach yourself to any mountaineering goal. Applying training practices from other endurance sports, House and Johnston, who combined have over 60 years of experience, demonstrate that following a carefully designed regimen is as effective for alpinism as it is for any other endurance sport and leads to better performance. They deliver detailed instruction on how to plan and execute training tailored to your individual circumstances. Whether you work as a banker or a mountain guide, whether you live in the city or the country, whether you are an ice climber, a mountaineer heading to Denali, or a veteran of 8,000-meter peaks, your understanding of how to achieve your goals will grow exponentially as you work with this book. Chapters cover endurance and strength training theory and methodology, application and planning, nutrition, altitude, mental fitness, and assessing your goals and your strengths. Chapters are augmented with inspiring essays by world-renowned climbers, including Ueli Steck, Mark Twight, Peter Habeler, Voytek Kurtyka, and Will Gadd. Filled with photos, graphs, and illustrations.97819383402399781938340239Training for the New AlpinismInstructionalen is about to hit the shelves shortly. The book is about training for alpine climbing. In this respect, it appears to be somewhat similar to Climbing Stronger, Faster, Healthier: Beyond the Basics, 1 Edition.D.C., Michael A. LaytonCreatespace Publishing2009A must have book for all climbers: boulderers, sport, trad, ice, alpine & big-wall. Complete training and conditioning section, up to date nutrition section, full injury and rehab section written by a sports physician, Climbing tips and tricks from the pro's (learn their secrets), huge section on gear, and the only info available on proper bolting and anchor placement. Hundreds of photos!97814392319829781439231982Laytonguidebooken. Definitely interesting to see what its like.

His first book Beyond the Mountain.House, StevePatagonia Inc2009What does it take to be one of the world's best high-altitude mountain climbers? It takes raising funds for an expedition, negotiating some of the world's most dangerous countries, suffering freezing-cold bivouacs and enduring the discomforts of high altitude. It also means learning the hard lessons the mountains teach. This book explores those lessons. Dubbed by Reinhold Messner, "The best high-altitude climber in the world today." Steve House's story chronicles his experiences in the worlds highest mountains, each chapter revealing a different aspect of mountaineering.97809790659589780979065958HouseBiographyen concentrated on his development as a climber and select ascents, mostly his attemps on Nanga Parbat culminating in first ascent of Central PillarNanga Parbat8126mRupal facenccs VII 5.9 M5 WI4; WI4 M5 5.94100m. 8 days round trip 4500m, a climb that won him Piolet d'Or.