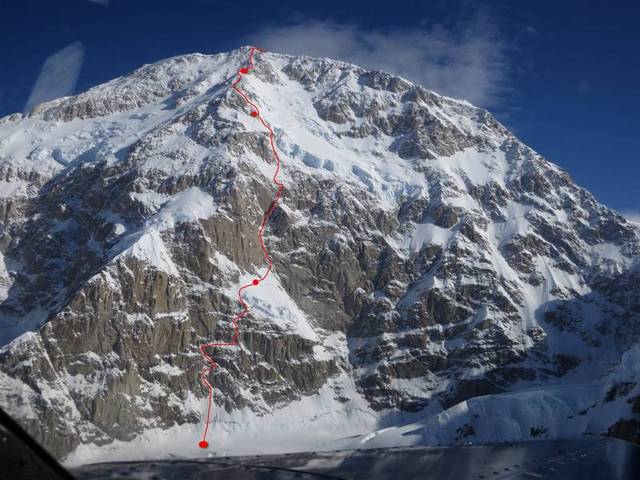 While browsing Vimeo I came across interesting pair of videos regarding Andy Houseman and Nick Bullock's ascent of Slovak DirectDenali6190.5mSouth faceAK6; WI6 M5/100°, 5.9/V+2700m. The route went formerly with the name "Czech Direct", but was later renamed as the FA party was indeed Slovak, not Czech.

It is very big route indeed, that has got a lot of fame as it was heavily featured in both Extreme Alpinism: Climbing Light, Fast, and High, 1st edition.Twight, Mark & Martin, JamesMountaineers Books1999* The most advanced climbing how-to on the market * Techniques and mental skills needed to climb at a more challenging level * Illustrated with full-color photos throughoutBig, high routes at the edge of a climber's ability are not the places for inventing technique or relying on old habits. Complacency can lead to fatal errors. So where does the hard-core aspirant or dreamer turn? The only master class in print, Extreme Alpinism delivers an expert dose of reality and practical techniques for advanced climbers.Focusing on how top alpine climbers approach the world's most difficult routes, Twight centers his instruction on the ethos of climbing the hardest routes with the least amount of gear and the most speed. Throughout, Twight makes it clear that the two things he refuses to compromise are safety and his climbing ethics. In addition to the extensive chapters on advanced techniques and skills, Twight also discusses mental preparedness and attitude; strength and cardiovascular training; good nutrition; and tips on equipment and clothing.08988665450898866545Extreme AlpinismNon-fictionen and Beyond the Mountain.House, StevePatagonia Inc2009What does it take to be one of the world's best high-altitude mountain climbers? It takes raising funds for an expedition, negotiating some of the world's most dangerous countries, suffering freezing-cold bivouacs and enduring the discomforts of high altitude. It also means learning the hard lessons the mountains teach. This book explores those lessons. Dubbed by Reinhold Messner, "The best high-altitude climber in the world today." Steve House's story chronicles his experiences in the worlds highest mountains, each chapter revealing a different aspect of mountaineering.97809790659589780979065958HouseBiographyen Together with Scott Backes, Twight and House made 60h non-stop ascent, that is considered milestone in fast and light style of alpinism.